If you live in or near Piraeus Greece, you may have additional knowledge of the above vessel which was damaged at Piraeus / Methana sometime after 23 April 1941. If you have any further details about what happened to this vessel after it was sunk and then recovered, please contact us!

So far the evidence is that the vessel (converted to a motor-tanker) was badly damaged in April 1941, but survived for use until circa 1948. Do you have photographs of Methana, or Piraeus, anchorages where fuel-tankers were berthed around that time? This was the last, and largest, of the 12 R&J Craig 4-mast hulls, and was a very fine, late, example of a square rigger – technically known as a “full rig ship”. Friends in Athens are studing the local harbour records.  An iteresting story is emerging of a “productive later-life” of this ship. Watch this space (May 2019) 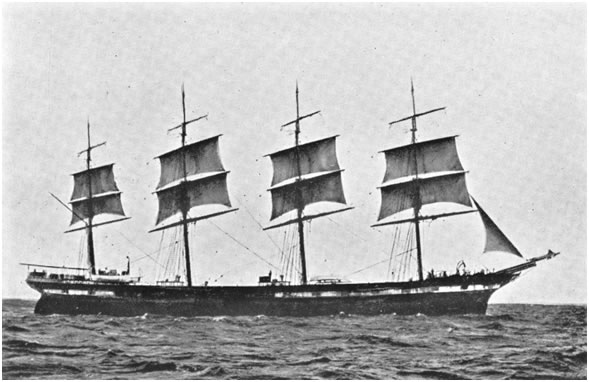 “County of Linlithgow” at sea with topsails, whilst owned by R&J Craig {Private collection}