This website was launched in advance of a manuscript about the “high point of sail power” – in the era between 1873 and circa 1898. An ensuing book on maritime history reveals important developments from the ‘powerhouse’ behind the great advances in sailing ships: the River Clyde. 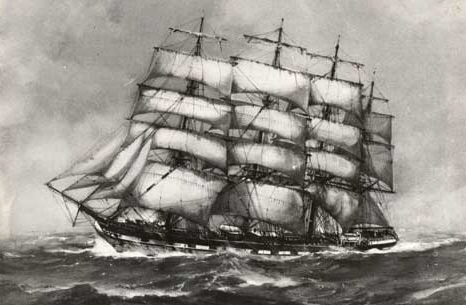 An early picture of ‘County of Peebles’ (launched 1875)

In view of the milestone decision by a Scottish ship-owner, to introduce 4 (rather than 3) masts, the story encapsulates a renowned fleet of 19th Century ‘clipper’ ships registered at Glasgow, Scotland – at the heart of the 19th Century sail-power revolution.

THE STORY SO FAR

Much of the history of shipbuilding in the UK, and in particular in Scotland,  had/has been buried under accumulations of junk in dark attics. Sometimes precious maritime heritage was retrieved unexpectedly after having resided at the back of rusty old filing cabinets.

In discovering the remarkable story of how Robert Craig created the famous Scottish shipping company of R&J Craig, it was necessary to dig-out from crumbling cardboard boxes evidence of the lives of previous generations. Often portions of the jig-saw of information resided in unprepossessing bundles of papers. And occasionally on high shelves in almost derelict repositories! Frail documents which had not seen the ‘light of day’ for many decades, were gently coaxed from their dark & dusty slumbers and fresh observations began to form the patterns leading to a cohesive story.  Key documents stored for years in family attics, the lables having long gone, were found wrapped in tired brown paper.  Faded newspaper cuttings in the oldest photographic albums also provided many clues to the bigger picture.

In short, this story would have lapsed had it not been for the remarkable number of individual guardians or curators of family heritage. Often they were holding onto materials that they did not themselves know the origins of, or the importance to the eventual story.

And so a manuscript emerged and a book was published.

Entitled “GONE . . . . “, the book is: “. . . a revealing portrait of the people of R&J Craig of Glasgow, and their fabulous 4-masted sailing ships named after Scottish counties” ~ recognised round the world as “Craig’s Counties”. 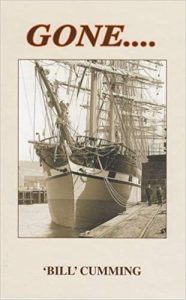 First Editions of this book are still available. It was initially released in December 2009, by the renowned maritime publisher Brown, Son & Ferguson of Glasgow (book reference – ISBN 978-1-84927-013-7)

The book GONE can be purchased from:

Since its release, copies have been seen all over the UK. It is also reported in other predominantly maritime nations. They are to be found in the USA, Australia, Holland, Germany, New Zealand, South America, Canada, Sweden, Denmark and the Baltic states, Russia and Greece.